Recently a new kinetic installation went live in Terminal 4 at Changi Airport, Singapore. This installation is quite special, not only because of its mechatronic complexity and sheer size but because it offers an audio experience too. In this post I want to describe how this mobile audio experience was implemented. 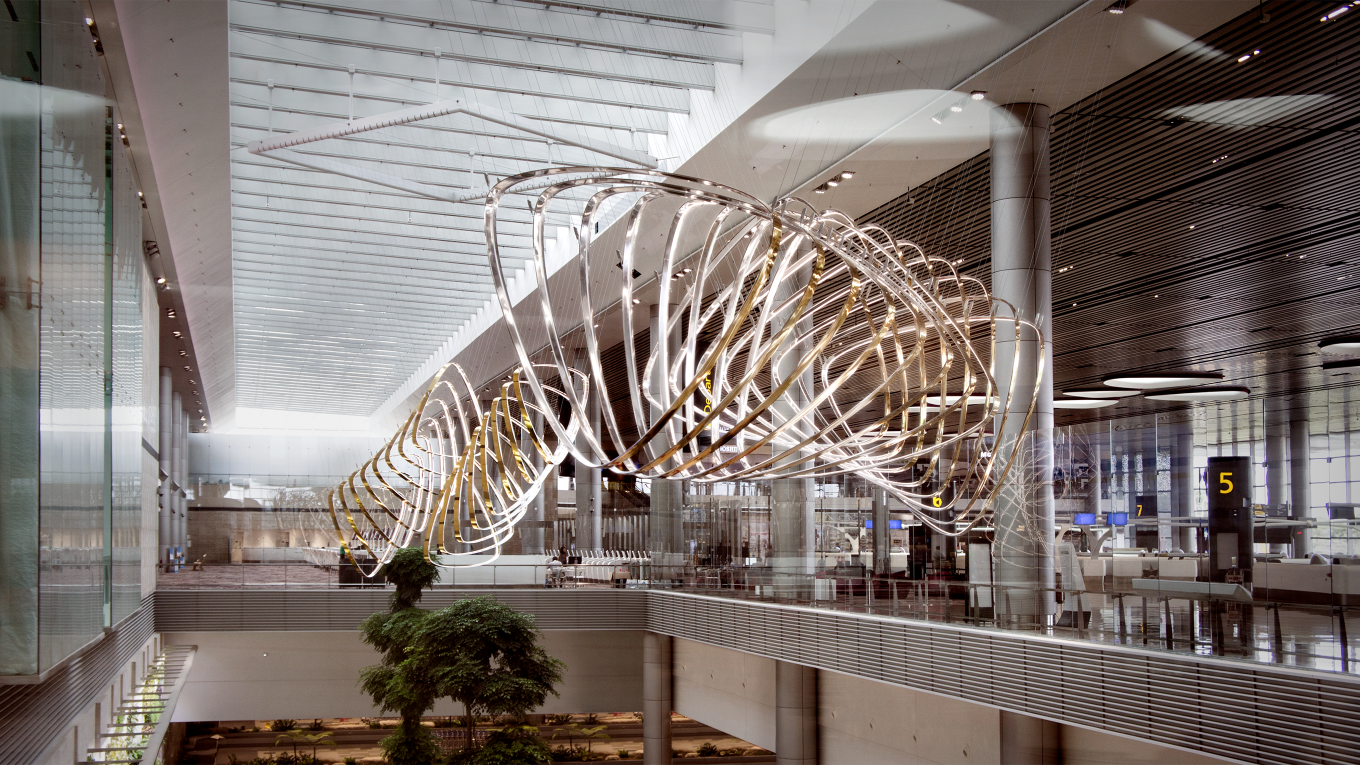 For the artistic, non-technical description of the project please see the official artcom project page and Changi Airport Video. The post focuses on the audio sync features of the installation.

When the kinetic installation performs its choreography by moving its golden aluminium rings across the ceiling it will do this to a music composed only for this purpose by islandic composer Ólafur Arnalds. On the terminal floor are multiple vantage points - areas equipped with speakers where travelers can watch the choreography and listen to the music.

Aside from the fixed locations, travellers can also listen to the music in quiet over their mobile phone from within the iChangi App(iOS, Android) anywhere in the terminal.

One obvious and optimal approach could have been to synchronize audio sync server and clients via ntp to cope with the nondeterministic timing of data packets transmitted over the internet. Since NTP is based on UDP and most mobile network carriers block UDP traffic this would not have worked. Even the handling of regular websockets can be very difficult because of the sometimes problematic proxy configurations of some carriers.

So we decided to use websockets and a heuristic approach to deal with timing jitter. To make the websocket connection as robust as possible we used Socket.IO. This framework wraps websocket communication inside an own protocol, which enables a client to easily up- or downgrade from websocket to long polling etc.

To eliminate jitter at least a bit the server sends a sync message to the client:

The field time describes the actual time on the server. The field position is a timestamp in milliseconds that represents the current point in the choreography. The field offset is the approximated latency between server and client. The sum of these two values is the current playback position on the client.

The client immediately acknowledges the message by returning the time value:

The server calculates the time it took to get the timestamp back and buffers about 10 of those lag values. To calculate the current average lag of the system it first sorts all lag values and denoises them by determining the standard deviation and removing all values which are above median + standard deviation. Then all remaining values are simply averaged. This makes the system react a little slower to sudden changes in timing, but more stable.

Building the Synchronization Server and a Demonstrator

The server was built quite quickly using Node.js. To provide WeesWares with a working example I also wrote a simple iOS app to demonstrate the synchronization concept:

In case you’re have further questions about this app or are in general interested in our kinetic programming and otherwise please do not hesitate to mail us.